Could you be eligible?

ACLC is hosting Information and Guidance programmes throughout the year and is encouraging all to come along to learn and understand the scheme eligibility rules, and to check whether they can claim compensation.

* Hear from someone who has successfully been through the scheme process

* Ask questions to clarify your understanding.     Also see Q&As and these videos

* Learn what to do next, if you want to make a claim. 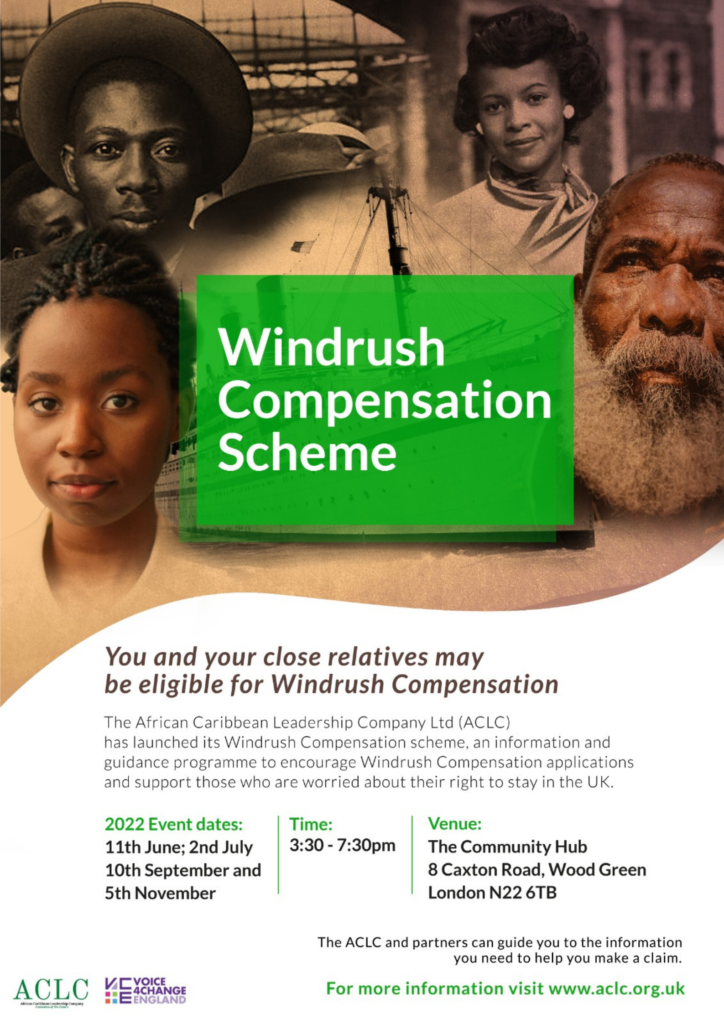 It is widely believed that there are many more people who are eligible to claim Windrush Scheme compensation. People are still hurting, and some feel too humiliated to claim.

Some came here to work, save money and return home. Some had been recruited because Britain was short of workers to run the transport system, postal service, hospitals and factories. Other West Indians were returning soldiers who had fought for Britain during the Second World War.

The Windrush wasn’t the first ship to bring numbers of Caribbean migrants to the U.K. The Ormonde and Almanzora had arrived the previous year carrying smaller numbers, and there were also already settled communities of West Indians and Indians in Britain’s larger port cities. However the Windrush represented an unprecedented ‘one-off’ influx of non-white immigration in terms of scale.

The Windrush scandal is a British political scandal which was revealed in April 2018 concerning people who were wrongly detained, denied legal rights, threatened with deportation, and in at least 83 cases, wrongly deported from the UK by the Home Office.

A major cause of the injustice and harms done to the Windrush generation of Commonwealth citizens was the loss of British citizenship rights. The origins of the scandal dates back to the policies pursued by post-war governments intentionally designed to restrict Black and Asian British nationals coming to the UK.

Case studies
These are just some example cases of people who have successfully received compensation:

“Ms. B had several employment offers withdrawn due to being unable to demonstrate her lawful status in the UK. In 2019, Ms. B applied for documentation, which was granted within two months. Ms. B also applied for compensation and was paid over £93,000 pounds.”

“Mr. X’s employment was terminated as he was unable to demonstrate his lawful status in the UK. In 2018, Mr. X applied for British Citizenship under the Windrush Scheme which was granted within two months. Mr. X applied for compensation and was paid over £50,000 pounds.”

“Mr. Y’s housing benefit was stopped as he was unable to demonstrate his lawful status in the UK. Mr. Y was evicted from his home and denied access to housing services. In 2019, Mr. Y applied for status under the Windrush Scheme and received documentation on the same day of application. Mr. Y applied for compensation. Following an interim award and preliminary payment, Mr. Y received a final award of over £79,000 pounds.”

“Ms. T was negatively impacted by her mother’s immigration difficulties, which impacted her family life. Ms. T applied for compensation under a close family member claim and was awarded £20,000 pounds.”

“Mr. R was unable to prove his immigration status when applying for a job and lost out on a couple months of work. Mr. R applied for documentation which was granted within two months. Mr. R then went on to apply for compensation and was paid over £23,000 pounds.”

The Windrush Compensation Scheme was launched on 3 April 2019.

On 26 May the Home Office published the latest set of data on the Scheme, which covers the period to the end of April 2022.

The total amount paid or offered to claimants through the scheme has increased to £48.7 million.

£40.5m has been paid across 1,037 claims and a further £8.2m has been offered, awaiting acceptance or pending review

The statistics also show that 50% of claims have had a final decision.

During the month of April, the Home Office paid out over £1.4 million in compensation.